I’m all for simple holiday décor and apparently something about having a little boy on the way is making me want to sneak a little more pink into the house. What better excuse to sneak in some pink than Valentine’s Day? Unfortunately, I also happen to be extremely pregnant at the moment, which means I am not moving very quickly.

It has taken me a ridiculously long time to make finish this garland/curtain considering how easy it is. Now that it’s finished though, I must admit that I love it! I’ve never really known what to do with these arches and now I think I’m going to have to figure out how to deck them out for every holiday/season.

This garland is made up of pom-poms and little cuddle hearts. It’s honestly a great way to use up scraps/leftovers from other craft projects. I love knitting but I always seem to end up with a tiny amount of yarn left over at the end. This was the perfect way to get those tiny balls of yarn out of my stash! The process of making the pom-poms was incredibly simple thanks to my Clover pom-pom makers. I have four different sizes and while I used mostly the smallest one, I used all four sizes for the center strand of the curtain. If you, like me, have a hard time figuring out the size of the pom-pom just based on a measurement here’s a picture of the largest size up next to my kitty’s head. It’s huge and I love it!

I’ve been soaking up all the kitten snuggles I can get during this project since I have a feeling my days of getting cuddles are severely limited. My cat is not a fan of children, and she’s really not a fan of babies. The quick, jerky movements and loud, unpredictable noises of small humans freak her out. I have a feeling this means I won’t be seeing much of her once my little boy is on the outside. I’ve already told the husband he’ll have to make it up to her and give her lots of extra attention for me. Anyway… making the pom-poms was easy, but it took a while. Take that with a grain of salt though since as I mentioned before I don’t move very quickly and there were a lot of bathroom breaks. Eventually I ended up with a pile of perfectly puffy pom-poms! This is only a very small portion of them:

The next step was making all the hearts. I made myself a little sheet with three different sizes of hearts, which you can get here:

Or, you can always just draw yourself three different sizes of hearts. I wanted to figure out the design of my curtain before cutting out my fabric so I laid out the design on the floor and used the paper hearts to decide which sizes to put where.

Then, I decided which colors to put where and I cut my hearts out of the fabric and laid them out on the floor and took a picture so I’d have a record of how I wanted to set up the garland/curtain.

In an attempt to make it easy on myself and since I’m using cuddle I can leave all the hearts with raw edges.

With wrong sides together, I ran all the hearts through my sewing machine while leaving a little hole on one edge of each of the hearts. Then, I went ahead and stuffed them with a little bit of polyester fiberfill. I then used my sewing machine to stitch the hole closed.

I decided to string my garland using yarn so I grabbed a sharp needle with a large eye and got going. To hang each string I put a slipknot at the top and slipped it over a tiny clear command hook. After eyeballing the placement in the arch I stuck the command hook with the string hanging from it to the top of the arch

There it is! A project so easy a 39-week pregnant lady can do it! I know that I’m posting this too late for anyone to actually make this by Valentine’s Day but who says a heart garland can only be for the holiday? Who doesn’t need a little extra love in their life? This garland can be a great reminder to show a little extra love any time of the year! Happy Valentine’s Day!! If you live anywhere near Castle Rock CO come see

What do you think of our new Scandinavian Winter L

Nordic Ribbons pattern will be coming out with our 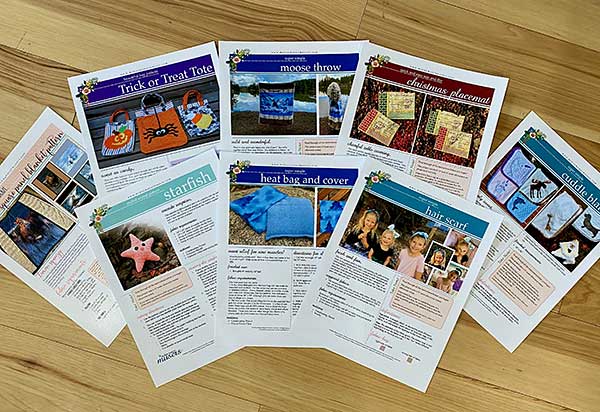